Programming to an interface

If you come from a Java background like myself and you hear the word interface you will think of something like that:

Yes, that’s an interface. No doubt. However, it’s not the same interface as in “program to an interface”! Sounds strange? Not at all.

A consumer can use the interface without knowing about the concrete implementations.

Whenever you build a larger piece of software, you will have dependencies to other systems. For example to a relational database or to a REST-API. All of those dependencies represent tools for your software to fulfil its goals. Such a goal might be to manage contacts in an address bock app or to process orders in an online shop. But whatever the goal of your software is, your goal as a software developer should be to model your problem domain nice and clean.

To achieve such a clean domain layer in your application, you need to create a separation between your domain and external systems. So instead of programming to a relational database, you program to a “data store interface” (UserRepository, OrderRepository). Instead of programming to a REST-API, you program to a “client interface”. This will make your application independent of all dependencies and focused on its own domain. If you use MongoDB instead of a relational database tomorrow, it’s no problem. All your code is developed to an interface and doesn’t even know that there is any database behind it. 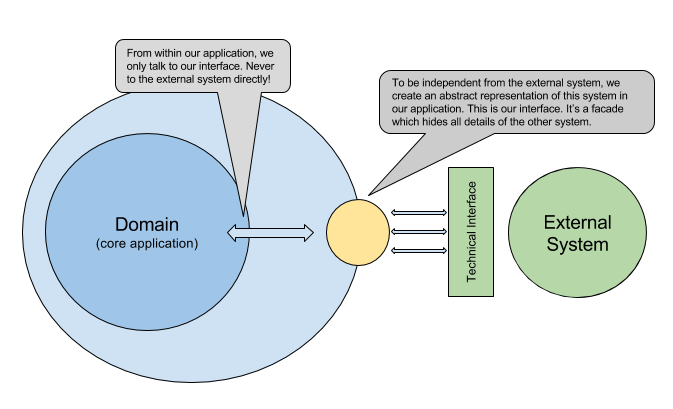 In the example above, your dependency (obviously a relational database) defines your interface (not the other way round). Because the database requires a technical ID for each entity, your interface just reflects this. It doesn’t hide the fact that you use a database, it even has the word “Database” in its name and returns database entities instead of domain objects.

By using such an interface, you don’t decouple your software from the other system. Wherever you use the interface, you will know that you work with a database and you will need to deal with the entity classes from the database layer. All details are exposed.